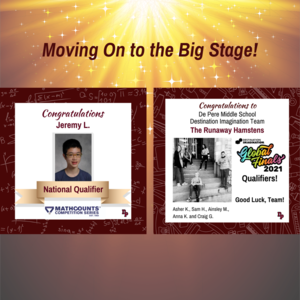 We're proud to recognize six De Pere Middle School students for earning the opportunity to represent our school district and our state at the highest levels of academic competition.

Jeremy L., a De Pere Middle School/Virtual Learning Academy 8th grader, is the first student in our District to qualify for the National MathCounts Championship. Jeremy placed 3rd out of 42 competitors at the state-level championship in late March. He and three other Wisconsin students will comprise Team Wisconsin at the 2021 National MathCounts Championship which is also being held virtually this year.
MathCounts was established in 1983. Its "Competition Series" cultivates talent in the nation's brightest young minds by bringing together students from all 50 states in a series of contests—the only math-focused competition program of its kind in the US.
Jeremy is coached by District Talented and Gifted Program Coordinator Chris Hendricks.